My husband and I had the pleasure of being invited on a trip to Peru with Adventures by Disney, and here is my report.  Come see what Peru has to offer in its adventure: Sacred Valleys and Incan Cities.

This adventure has been on the “ to do list” for a long time.   Since the fall of 2009, my husband has wanted to take this adventure and was even willing to give away a night in the Disneyland Suite to do so… but I quickly talked him out of that.

So, when I got an email inviting me to go to Peru, I jumped on it without even thinking.  Three days before Christmas I got the word that we were going to Peru, and that was an awesome Christmas present!

I found some decent flight times with United Airline–not too early and not too late… well that is what we thought.  The first day of the adventure is just getting to Lima.  We departed Pittsburgh a little after 11am, arrived in Houston after 1pm and our connection was to depart after 3pm.  We were delayed in Houston for about 2 hours so our arrival into Lima was going to be later than expected.  I called the emergency line that Disney gives to you if your flight is delayed and they assured me everything was going to be ok and not to worry.  They even called me back to make sure we were ok; I thought that was great.

We got on our 6 hour flight (watched some tv shows and my favorite movie Tangled) and arrived into Lima after 1am and made our way through the airport.  This was a very easy transition.  I had been a little worried going through customs and such, but it was very easy.  Getting luggage was a little bit of a wait, but not too bad.  Our Disney representative was there just outside the customs area waiting for us… and so were hundreds of Peruvians waiting on their loved ones.  I was surprised since it was so late, but they were all there waiting with signs and flowers.  It was very nice to see this.

We got into to our private van and met up with two other adventurers on our flight and took the 30 minute drive to our hotel.

Upon arriving at our hotel, the Casa Andina Private Collection Miraflores,  we learned there had been an earthquake in Chile, and that there were tsunami warnings for Lima (We were in Lima!  This was never mentioned to us–we found out via Facebook from family.)  Thankfully, I’m still here to write this trip report.  We had a brief sleep as we were to meet for breakfast at 6:30am and then off to the Lima Airport to catch our flight to Cusco so the adventure could truly begin.   Sorry no pictures of the hotel room, we got in too late.

We got up and went down to breakfast, leaving our luggage outside the

door so the magical pixies could come and get bags and make them magically appear in our next hotel room in Sacred Valley. Another trip via bus from the hotel to the Lima Airport and–with a group of forty people–it was quite interesting to maneuver  through the airport.  The Adventure Guides handed out the boarding passes, and then we all went through security… where you could leave your shoes on and liquids and laptops did not need to be separated.  So it went quickly.  There was a short delay, and we waited for about an hour, then boarded a bus to take us on to the tarmac where we boarded the plane.

It was a short trip–about an hour–and we got a simple boxed lunch with a turkey sandwich and a cookie.  Drinks are served without ice and were not cold.  When we arrived in Cusco, we were divided into two buses as the roads were not built for large tour buses. 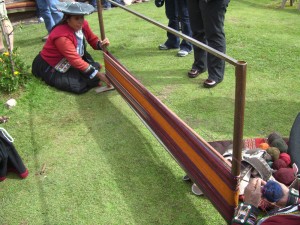 Center for Traditional Textiles of Cusco and lunch.  This is where I discovered their Coca-Cola was a little different than what I expected.  First I got a glass bottle–which I loved–but the taste was different..though still good.  We were presented with the best guacamole EVER and a light lunch of Peruvian specialties…different, but good. After lunch, we had a weaving demonstration and then some shopping.

We soon came to learn that almost every time we got on the bus that we would be on there for about 90 minutes.  That just became the rule of thumb.  So we got on the buses to head to our home for the next four nights, Sol y Luna Hotelin in the Sacred Valley…a little bit of paradise. 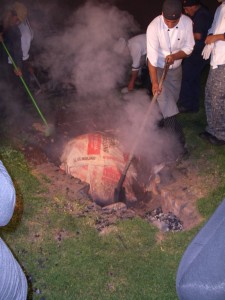 Pachamanca–and watched a performance from the Teatro Sol y Luna that told the stories of the Incas.  It was a long day and we retired in our private cottage and found warm water bottles in the bed. It was the perfect touch to a perfect day 😀

4 thoughts on “Sacred Valleys and Incan Cities–Adventures by Disney”