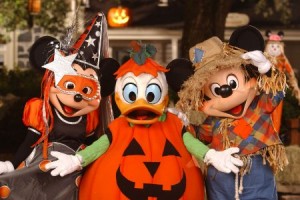 One of my favorite times to visit Walt Disney World is during the holidays, especially at Halloween, when the park holds Mickey’s Not So Scary Halloween Party.

Some of the restaurants will feature fall-inspired menus, the bakery and confection shops 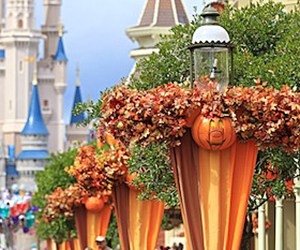 will have Halloween-themed dipped apples, cupcakes and cookies. The the retail shops will carry a wide assortment of Halloween merchandise. Even though the Halloween decorations make The Magic Kingdom festive, it isn’t until the sun goes down that the park takes on a magically spooky atmosphere during one of those Halloween parties.

The real star though, is Mickey’s Not So Scary Halloween Party, where you’ll find plenty of eerie entertainment awaits you at this ghastly bash!

The evening begins with Disney Villains Dance Mix and Mingle! in front of Cinderella’s Castle where some of your favorite Disney film baddies rock the stage. When the number is over, they veer into the crowds for meet and greet.

In Frontierland, you just might find a barbershop quartet of dead cowboys singing like the Dapper Dans. They may even “axe” you some questions so they can show off their “dead pan” humor with puns. 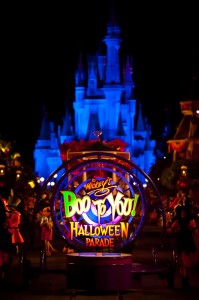 In “Mickey’s Boo-to-You Halloween Parade”, you’ll see your favorite characters dressed up in their Halloween costumes. The floats feature Disney Villains as well as your beloved Disney friends. The parade begins with an entrance from the Headless Horseman! The Haunted Mansion really stars in this delightful parade. It’s really no so scary – just fiendishly fun!

At 9:30 pm, the Ghost Host from the Haunted Mansion invites you to “drop in” as the sky lights up with one of the best fireworks shows that Disney offers throughout the year. You definitely do not want to miss this! Disney Villains take center stage in the Halloween edition of  this nighttime projection show on Cinderella Castle. You’ll see Ursula lording over the poor unfortunate souls trapped in her underwater lair, Chernabog spreading his wings over the face of the Cinderella Castle and Maleficent casting a forest of thorns over the base of the castle, then transforming into a fire-breathing dragon.

And, if that’s not enough fun for you, you can dance the night away with your favorite Disney characters in the “Monstrous Scream-O-Ween Ball” and “Woody’s Happy Harvest Roundup.”

There’s even a ghoulish surprise from the PhotoPass photographers! You can have two 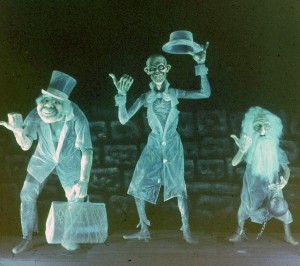 Dress up in your favorite costume to collect candy throughout the Magic Kingdom park. You’ll soon discover all the boo-tiful ways that the spirits of the season have transformed the park into a happy haunted hallows!

Just because it’s the spookiest time of the year doesn’t mean it can’t be magical as well!