On April 10, 2014, people from around the world will unite in a singalong to commemorate the 50th anniversary of “It’s A Small World,”  the Walt Disney classic attraction that opened at the 1964 New York World’s Fair.“It’s a Small World” was made for the New York World’s Fair, debuting April 22, 1964, before moving to Disneyland. It was built to pay tribute to UNICEF’s work for children around the world, carrying a message of peace and hope. The ride features small dolls in international costumes singing “It’s a Small World” – a tune well known for sticking in people’s heads – in five different languages.

Everybody in the world knows that song. It’s a song that we all have a love/hate relationship with. It brings a smile to peoples’ faces and holds a special place in all our 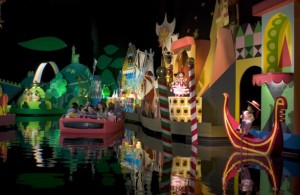 Since “It’s a Small World” can be found at five Disney parks on three continents (Disneyland park in California, Magic Kingdom Park in Florida, Tokyo Disneyland, Disneyland Paris and Hong Kong Disneyland) the iconic theme song is always playing somewhere around the world!

The singalong is part of the 24-hour celebration of the attraction that will run in all five Disney resorts, as well as a recognition of the song itself. Richard Sherman, who co-wrote the tune with his brother, the late Robert Sherman, is expected to appear in Disneyland on April 10. You will notice the actual anniversary date falls on Earth Day, but Disney officials have chosen to focus on that instead on April 22.

Thursday morning, Walt Disney World Resort cast members from the countries of Epcot will belt out the iconic song in front of Cinderella Castle during a “live global sing-along” on ABC’s “Good Morning America.” 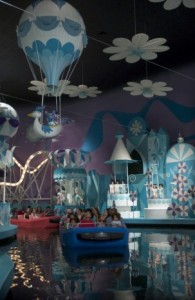 You are invited to join the celebration on April 10 as hundreds of voices from our parks around the world come together for a first-of-its-kind, online global sing-along!

‘It’s a Small World’ has inspired hundreds of millions of people through its timeless theme,” said Tom Staggs, chairman, Walt Disney Parks and Resorts. “Every moment of every day there are Disney guests enjoying ‘It’s a Small World’ somewhere around the globe.  The 50th anniversary of this attraction represents a celebration of the shared optimism, hope, and humanity of people throughout the world.”

So, go share your online video at SmallWorld50.com today and help Disney spread the word of peace and hope with the world! Go ahead…you know the words!