I ran into a high school friend of mine in the grocery store yesterday.  I told her that we a

re hoping to head to Disney World this fall.  Her comment to me was, “Why would you go to Disney World?  You don’t have little kids.”  That got me thinking about this common misconception about Disney World.  Most folks think that the magic is only for small children… Well, I’m here to tell you: Disney World isn’t just for kids!  When you break down what is available at Disney World, you can find several “grown up” things to do.  Each park offers a variety of attractions that might be frightening or possibly boring to children.  That’s what makes the magic!  There is literally something for everyone.

et’s start our exploring in the Magic Kingdom.  As you enter the park, you can’t miss the massive locomotive, operating just above the gates.   This rail system has some amazing history behind it…so much so that they have build special tours around these trains.  You can learn about the four engines that have been in operation since the opening of the park.  You will learn fascinating facts like the railroad transports 1.5 million people a year, the names of the trains are Walter E. Disney, Lilly Belle, Roger E. Broggie, Roy O. Disney and there are 10 whistles combinations that are used daily.

While in the Magic Kingdom, there are several attractions that adults would enjoy.  For the daring, Disney’s triple mountains would be a sure stop.  Space Mountain sends you rocketing through the dark while twisting and turning.  Thunder Mountain is a venture inside a 200 foot mountain  racing toward Big Mountain Mining Company.  If you can keep your eyes open, you will notice all of the real mining antiques spread throughout the ride.  The final mountain, a personal favorite of mine, is Splash Mountain.  When you climb into your log, you will begin a nice, calm meander through swamps and meadows.  Don’t let that happy music fool you!  A massive five story waterfall awaits at the end! 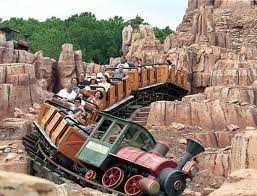 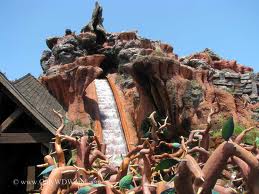 In my opinion, EPCOT is probably the most adult-friendly park.  Each country in the World Showcase, offers attractions that tell the history of the country, awesome restaurants, and authentic shops.  You can spend hours in each of the 11 countries that are represented.

and learn about some of Disney World imaginative ways to grow crops.  When you exit the boat, you can eat at the food court which features the food grown right in the greenhouses that you’ve just seen!  While in the Land, take a ride on a hang glider while Soarin‘  over California.  You will see and smell the forests, the rolling ocean waves and the orange groves.

For all of you Michael Jackson fans, Captain EO is back (for an undisclosed time)!  This will bring back some great memories of red leather jackets and sparkling gloves.  The story, right in line with Disney style, involves and evil queen who needs to hear a special musical message.

Of course, EPCOT has some great rides for adults, too.  Mission Space offers riders a one of a kind experience that launches you right into outer space!  This is a heart pounding trip that starts with the countdown, pushes you through the Earth’s gravitational pull and even s

imulates weightlessness. Each person in the “ship” gets to take part in an important roll on the voyage.  Another great adrenaline rush can be accomplished on Test Track.  Guests get to create their own car, designing with custom features.  The ride itself takes you through the tests such as rough roads, changing weather conditions and the best part…speed!  The car accelerates through turns as it travels outside with the wind whipping through your hair!

The next place that I would suggest for adults is the Animal Kingdom.  Here, you can

experience another great mountain of Disney World, Expedition Everest.  Venture inside this huge stone structure at the base of Everest.  Begin your adventure in a weather beaten, old train.  As you climb, the journey seems safe enough…  As you reach the top, thought, hold on tight!  You will be sent plunging, twisting, and turning 80 feet down.  Keep an eye out for an unexpected angry Yeti along the way.

While in the park, be sure to explore the walking trails of Maharajah Jungle Trek, Pangani Forest Exploration Trail, and the Oasis exhibits.  These areas are full of animals and interesting facts.  There are also several tours within the park.

The final park, a by far not the least, is Hollywood Studios.  Here you can learn about the l

egend that is Walt Disney in One Man’s Dream.  The Studios offers film lovers an inside look at animation and a view of one of a kind movie props and costumes.  And don’t let me forget, the rides!!!  Two of the most thrilling adventures are found here.  The Rock N Roller Coaster will send you reeling around sharp bends, up and down hills and even on a few loops!  All of this while trying to get to a concert in a limo pumping Aerosmith tunes.

One of the most heart racing experiences is Twilight Zone Tower of Terror!  Ride th

e haunted elevator to the 13th floor.  You will pass by some of the past inhabitants of the 1939 hotel.  As your skyward adventure continues, you will see the open doors and DOWN you will fall!  The elevator free falls down the abandoned shaft leaving your heart and stomach at the top!  Now, that’s what I call adult fun 😀

If you decide that you would like a day or so outside of the parks, I will let you in on one of my favorite pastimes at Disney World:  Resort hopping.  I love to travel around to the different resorts and see the beautiful architecture, try the different cuisine and shop in all of the stores.

When the sun sets, take advantage of some of the great restaurants and beautiful views at the Boardwalk.  Stroll hand in hand down the Coney Island style boardwalk and end the night dancing away at the Atlantic City Dance Hall.

So, the next time someone says “Why would you go to Disney when you don’t have kids?”, you know exactly what to answer “Disney isn’t just for little kids.  It’s for us big kids, too!”