Magic Kingdom is my favorite theme park for fireworks.  The show there is called Wishes!  It is special to me.  It will tug at your Disney heart.  I suggest staking out your favorite spot early.   There are several good viewing areas.  The best ones are the first ones that fill up.

I love to see the Disney fireworks Wishes! over Cinderella’s Castle.  It always leaves me smiling.  I love being close to the castle and watching Tinkerbell fly over.  Stand right in front of Cinderella’s Castle for this view.  I stand right behind the Partner’s Statue.  I hope to stand there and take a picture just like the one on the right.

It isn’t just about the Disney fireworks at Magic Kingdom.  One of the best parts of the show happens before the fireworks start.  Disney has added a fun pre-show.  Over time this pre-show has had changes made to it.  Disney keeps it very current and fresh.  This is a projection show.  There are images projected right on to Cinderella’s Castle.  The newest shows starts in November of 2012.  It is called Celebrate the Magic.  It celebrates the many years of Disney magic.  Check the Disney calendar for exact times for Wishes. 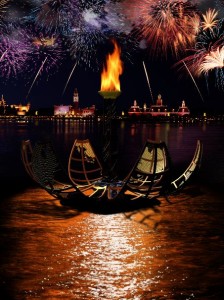 You will see laser lights directed at each country.  There is a revolving Earth globe.  On the globe you will see beautiful projections of video from around the world.

You will find a good spot for viewing Illuminations along the World Showcase.  I love to watch it near Germany.   After the show you can sit on a bench and people watch.  Let the crowd go ahead of you.   You can take the time to relax and enjoy the feel of Epcot as it closes. 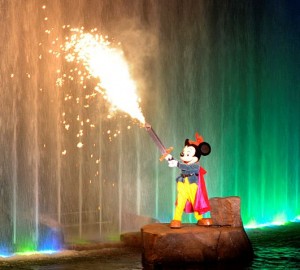 Disney’s Hollywood Studios has Disney fireworks, too!  Fantasmic is shown there.  The show is based on a dream world battle.  Good versus evil in the battle.  Mickey Mouse’s imagination comes to life.  The production features water animation, lights, fireworks and lasers.  It is really an amazing show.  Take care with younger children.  There are parts of this show that can be a little frightening and loud.

This show is not always shown every night.  Make sure you check the Disney calendar for available dates.  There is stadium seating for Fantasmic.   Disney is busy renovating the area.  They are adding 1000 new seats!  You can reserve a Fantasmic Dinner Show.  The dinner show will give you preferred seating.  The restaurants that offer this are Mama Melrose, Hollywood and Vine, and The Hollywood Brown Derby.  You should book this dining as early as possible.  It sells out  fast.