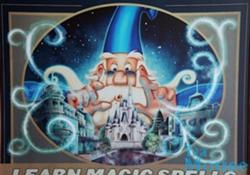 Back in March, while waiting in line for an attraction at the Magic Kingdom, I overheard some young men excitedly discussing a new Disney adventure game that they were involved in. Given the length of our wait, and their excitement, I simply had to inquire as to what they were talking about. It was the Sorcerers of the Magic Kingdom game. Apparently, the social media networks were all a twitter about this interactive adventure card game. In February 2012, it was released in the beta testing stages. The fellow I talked to said he never expected to be sucked in by a Disney game when he began, but, by the time I talked to him, he was totally sucked in and having a blast. (Those may not have been his exact words, I am somewhat older than him and my memory is waning.)

So, just what is this game all about? I am intrigued! 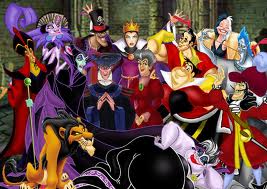 The premise is that, Hades has become bored with the nothingness of the Underworld and is looking for a new summer home and the Magic Kingdom looks like the ideal spot. (Go figure!) Only Merlin stands in his way. Hades sends Pain and Panic to Merlin’s home to steal the Crystal of the Magic Kingdom, a powerful artifact that keeps evil forces in check at the park. (I KNEW there had to be something like that going on!). They end up awakening Merlin and in the scuffle, the crystal is shattered into several pieces, four of which are scattered to different locations throughout the park. Annoyed, Hades decides to call upon a team of villains to help retrieve the crystal shards for him, including Yzma, Jafar, Scar, Maleficent, Ursula, Ratcliffe, Dr. Facilier, and Cruella de Vil. Merlin is on board to fight evil, and enlists us – the Sorcerers of the Magic Kingdom, to help defeat the foes. 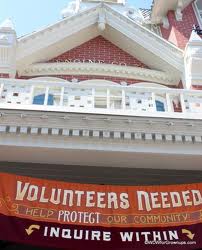 Starting off at the Main Street Firehouse, which is Merlin’s special hideout, you are handed a specialized map of the Magic Kingdom and free set of cards – one key card, and 5 spell cards which hold various attacks of differing strengths used to fight the villains. The first magic portal presents a brief tutorial, which teaches the basics of the game with Portal activation and spell card usage and begins to tell the story. At the end of the tutorial there are instructions as to where you’re supposed to go next. The Magic Portal screens are programmed to figure out which nearby screen is open upon the completion your task. This is to help prevent lines at the Portals. Each game starts at a specific portal, hidden somewhere within the park. Portals only activate when you wave your key card in front of them; until then, they’re just part of the scenery. They could be a window, hidden in a fireplace or even hidden within an art gallery. (Hint, hint)

Once you find the specified portal – which is no small feat – you wave your key card in front of a lock located somewhere nearby, and a gateway to another world opens up: one where Disney’s most vile villains are teaming up to steal several powerful crystals that are also hidden within the park. If these crystals were to fall into the wrong hands, it could spell doom for the entire Magic Kingdom. Luckily, the park’s finest line of defense is YOU! 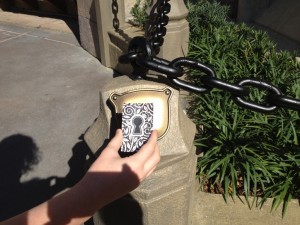 From there you travel from location to location, opening portals throughout the Magic Kingdom, watching a little cartoon at each place and waving a spell card in front of it to send the bad guys lurking within packing. You’ll find yourself visiting small corners of the park that you may never have thought to explore otherwise. You may even encounter a secret character in the park who may share a few tips or tricks to use in the game. When all the villains have been defeated, there is one final epic battle with Hades’ “number one guy” Chernabog. Once you have defeated him, you will become a Master Sorcerer and can proceed to the medium level of the game and from there, to the hardest level. (You’ll have to check-in with the Sorcerer’s Training booth to be set up for the higher levels.)

When you begin, you are given a key card which will correspond with your park pass. So you cannot have 5 key cards and expect to get a set of spell cards for each key. You must present your park pass with your key card, so everyone can play fairly. You’ll have to make a decision with your group – you can all battle together under one key card, or if you each receive a key card, you will most likely be separated and sent to different lands to explore portals at different times. 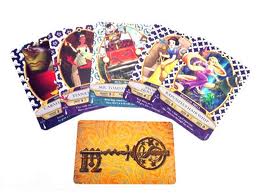 Every time you play Sorcerers of the Magic Kingdom, you will collect more spell cards. There are a total of 70 cards available, each with its own unique features and spells. It is certain that you will get duplicates, but you can trade these cards in order to collect the entire set. However, during the beta testing stages, Disney did not release cards 61 – 70. These last 10 spell cards will be released for sale only in August of 2012. While cards 1 – 60 will still be available for free in the parks, the remaining rare ten will only be available as part of the pack available via retail. All other cards, free and purchased, will be identical and can be used as part of the in-park game as well as at home. 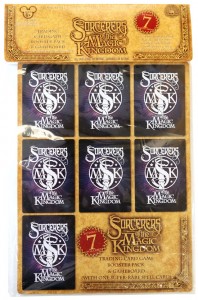 The trading game will contain 7 randomly selected spell cards, one of four game boards, game rules, new tokens and complete spell card checklist. Each of the boards represents a different area of the Magic Kingdom and features the villain whose hideout is there in the park. The game will be released at several Walt Disney World Resort locations as well as online through Disney Parks Stores at a future date.

It will be exciting to see where this game goes in the future with the addition of the at-home game. Disney Imagineers are already busy updating  portals, props, posters and banners in the Magic Kingdom. Disney is really working to make this an amazing experience.

Will Cruella de Vil trade all the Dalmatians she owns for possession of the Magic Kingdom Crystal? Will Maleficent take over all of Fantasyland with the shard of crystal she has found? Will Ursula use her crystal piece to flood Cinderella Castle? Or, will you be the next Master Sorcerer to defeat Disney’s most vile villains and save the Magic Kingdom so Merlin can return home to relax and enjoy the summer Olympics?