Disney Cruise Line’s sister ships Disney Dream and Disney Fantasy are just like real life identical twins. Exactly the same on the outside, but different on the inside, two fabulous ships with unique characteristics that set them apart.

Disney Imagineers realized the need to create a unique experience for Disney guests sailing both ships. They set both ships atrium designs in the same era, yet in a different style. Disney Dream is art deco while Disney Fantasy is art nouveau. Similar, yet different!

Disney Fantasy would be at sea for longer periods of time than Disney Dream.

One of these differences is found in the Animator’s Palate, a dining choice on both ships.

The Disney Dream version of this imaginative dining experience features a sit-down dinner conversation with Crush, the ever clever and super cool sea turtle from “Finding Nemo.” During your meal, Crush pops up on a nearby screen and begins to chat with members of your dining party. To borrow words from Crush, it was like “whoaaaa.”, and I was like, “whoaaa.” and you were like, “whoaaa…”

Still, Disney Imagineers needed to accommodate the Fantasy’s being at sea longer than the Dream. They decided that in addition to “Undersea Magic,” they’d add another show in Animator’s Palate to keep things interesting. That’s how “Animation Magic” was born!

In “Animation Magic,” you become the animator! 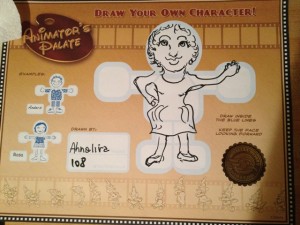 When you are first seated you will be given a marker and a place mat with blue boxes on it roughly stacked in the shape of a person. You will be asked to draw a figure on the place mat, making sure you draw within the blue lines of the boxes and with only one color. There is also a place on your place mat to sign your name to your artwork. While you are busy working on your character, your server will be taking your orders and serving beverages. Before the food starts to arrive, your server gathers all the drawings and delivers them to the backstage magicians, who work their magic while all the budding animators enjoy their meal.

Throughout your meal, scenes from classic Disney films are shown on screens near each table. At one point, Mickey Mouse pops in to let everyone know that he’s working on a special show as a finale to the meal. As the meal progresses, the restaurant becomes more colorful through lighting changes.

And then, just as dessert is being served, Sorcerer Mickey appears on the screens and 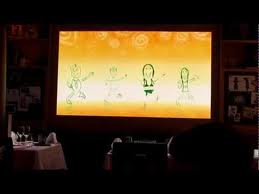 magically makes every diner’s drawing animate. A parade of flat folks come to life and strut across the screen in groups of four. Every single drawing gets it’s few seconds of fame, dancing, marching and skating to the music. Arms and hands, legs and feet move in unison in a chorus line of cartoon creativity at it’s best. Throughout the restaurant, you can hear guests exclaiming, “There’s mine!” and “Did you see yours?” and “Oh! Look at that one!” along with giggles and roaring belly laughs. Those clever backstage magicians even thought to arrange the artwork by table zones, so you’re guaranteed to see your art in action. If you look across the restaurant, you’ll see a different set of newly hatched characters dancing away. 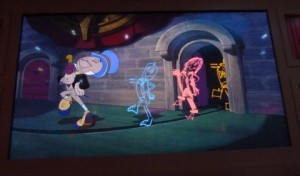 Halfway through the presentation – reminiscent of the way Tinker Bell used to turn a black and white screen into full color during the opening of Disney’s “Wonderful World of Color” TV show with a wave of her wand – guests’ animated figures are magically placed into classic scenes from Disney animated feature films. The animation becomes more elaborate, as the flat folks skip, skate and dance side-by-side with the likes of Mickey Mouse, Genie, Jiminy Cricket, Cinderella and other Disney characters. This is by far, the most magical moment of show. In fact the only disappointment at all is that not everyone gets to see their drawing interact side-by-side with Disney notables. But even so, seeing those drawings come to life and hold hands, dance and frolic to “Friend Like Me” sets it all right. In the end, everyone leaves this unique show clapping and smiling.

At the conclusion of the show, Mickey returns to say “So long!” while the credits roll on the screen showing each guest’s name listed as an animator. To commemorate the experience, guests’ drawings are returned to them …with an added touch: a golden seal proclaiming them an Official Disney Animator.

This experience was one of the highlights of my recent cruise aboard Disney Fantasy. I 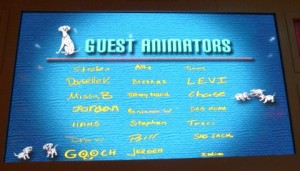 truly would have loved to have been able to see this again! There was so much energy going on throughout the dining room while “Animation Magic” was on the screen, that I am sure I missed something! I did take video of my table zone’s cartoon. But, you won’t see it here. This is something you need to experience yourself! Pure Disney Magic at it’s finest!

* The Themed Entertainment Association awarded Disney Cruise Line the “Ingenious Use of Technology” award for the “Animation Magic” show at Animator’s Palate on the Disney Fantasy.